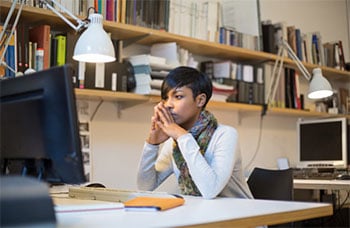 Modafinil has traditionally been prescribed for sleep disorders, including narcolepsy, sleep apnoea and shift work sleep disorder, and the FDA does not currently recommend its use outside of these recommendations. However, its unique ability to encourage alertness and wakefulness without the agitation, stimulation, or cardiovascular side effects associated with many other stimulants makes it a natural candidate for research into other uses. Indeed, more and more studies are evaluating potential therapeutic applications of modafinil.

Not surprisingly, one of modafinil’s most common off-label uses is in the treatment of lethargy or fatigue. Mental fatigue can have many root causes and is often associated with neuromuscular disease, chronic pain or depression. While modafinil has the clear potential to be effective in these cases, the evidence remains divided.

The potential application of modafinil for reducing fatigue associated with disease are virtually endless. Modafinil has been trialled in patients with fibromyalgia, primary biliary cirrhosis, amyotrophic lateral sclerosis, and myasthenia gravis. Further placebo-controlled studies are required to fully understand what types of fatigue are likely to be most responsive to modafinil treatment.

Of course, you don’t have to have a medical condition to feel tired. Many people turn to modafinil only now and then, when they’ve missed out on sleep. Indeed, it’s a favourite among some students wanting to pack in as many hours of study as possible. In a randomized double-blind clinical trial, modafinil was found to “improve attention for well-rested individuals, while maintaining wakefulness, memory and executive functions … in sleep deprived individuals”.

Taking the concept of using modafinil to combat fatigue to the next level, the USA, the UK and France are already using the drug in military applications to increase the length of time soldiers can function without sleep. A military study conducted on helicopter pilots showed that modafinil maintained the same “alertness, feelings of well-being, cognitive function, judgment, risk perception, and situation awareness” as dextroamphetamine (the predominant military stimulant) in sleep-deprived aviators, but without the potential for addiction.

Alleviating depression when nothing else can

The present body of evidence suggests that modafinil may be an excellent adjunct or even primary medical intervention in depression and other psychiatric conditions. Since 2000, researchers have been interested in the efficacy of modafinil for the treatment of various forms of depression.

Modafinil is also showing promise as a novel treatment for schizophrenia. A 2013 review of the use of modafinil in this context evaluated the current body of evidence and concluded that modafinil does appear to have benefits for both emotional processing and cognitive function, with pro-mnemonic effects and problem solving improvements. However, the researchers stress that the number of studies demonstrating these benefits remains small and further research is required.

Little evidence exists to support the use of modafinil to treat age-related cognitive decline. In a 2005 open-label study, 79 patients with vascular, subcortical, or Alzheimer dementia were treated with modafinil for 6 weeks and experienced minimal overall improvements and no cognitive benefits. A 2015 study of the effectiveness of modafinil in reducing apathy in dementia patients also showed no significant effects. A 2010 study concluded that psychostimulants in general do not appear to be particularly effective for treating dementia. However, a 2015 review cited a trial of 7 patients undertaken in 2013 that suggested modafinil did provide improvements in attention and cognitive state.

Modafinil may offer relief for breast cancer survivors with so-called ‘chemobrain’ – the cognitive impairment many of these patients report after treatment. It is not known how much of this impairment is a direct result of chemotherapy and how much can be attributed to other factors such as mental health problems, other medication, post-surgery effects and so on. But regardless of the exact cause, it is a recognised syndrome. A 2009 study of 68 breast-cancer survivors found a significant positive effect of modafinil on speed and quality of memory, effects that persisted into week 8.

An answer for ADHD?

In the early 2000s, two double-blind placebo-controlled studies investigated the use of modafinil for ADHD in children, both documenting improvement in symptoms. However, in 2006, two studies emerged to back up these findings with far greater power. A study of 223 children documented improvement in ADHD symptoms across all rating scales and subscales in children treated with 300 mg modafinil daily. When the dose was divided these improvements were still seen, but more inconsistently. Only one side effect – insomnia – was observed more frequently in the treatment group than the placebo group. A study of 200 children in the same year found that modafinil significantly reduced ADHD-RS-IV total scores both at school and at home. However, this study documented a few more side effects, finding increased incidence of not only insomnia but also headache, appetite reduction and weight loss in the treatment group compared with the control group.

Similar results are being found in adults. A 2000 study of 21 adults demonstrated improvement on the ADHD Behaviour Checklist for Adults, and a 2004 study reached the same conclusion, finding improvements in ‘short-term memory span, visual memory, spatial planning, and stop-signal motor inhibition’ and sustained attention in 20 patients receiving a single 200 mg dose of modafinil. Many participants demonstrated slowed response time in cognitive tasks, suggesting greater reflection as opposed to impulsive responses. The researchers acknowledge, however, that these results do not prove that benefits would be maintained with long-term use.

A novel approach to weight loss

On a completely different note, modafinil has found application in the treatment of obesity. Several studies have found that participants using modafinil experienced a reduction in appetite and weight loss. A particularly dramatic case is that of one particular schizophrenic patient who lost 18 kilograms in a year while on modafinil. These findings have led to further studies investigating just this effect.

A 2004 randomised double-blind placebo-controlled study demonstrated a significant reduction in energy intake in patients treated with modafinil. A 2008 study of 11 people in simulated shift conditions found that modafinil reduced caloric intake in a dose-dependent fashion: those receiving 200 mg consumed 18% less than without modafinil, compared with 38% for those receiving 400 mg. Participants also reported less feelings of hunger. The study was on a small scale and wasn’t blinded, but the magnitude of the effects certainly warrants further investigation.

But we’re not quite there yet!

While there are many promising applications of modafinil, there is not yet sufficient evidence to recommend it outside of its FDA-approved uses. It is also important to remember that the drug is not without potential side effects. Check with your doctor before using modafinil, especially if you’re currently taking any over the counter or prescription medications for an existing condition. Modafinil is a prescription drug in many countries, so make sure to research the legality of the compound in your particular jurisdiction.