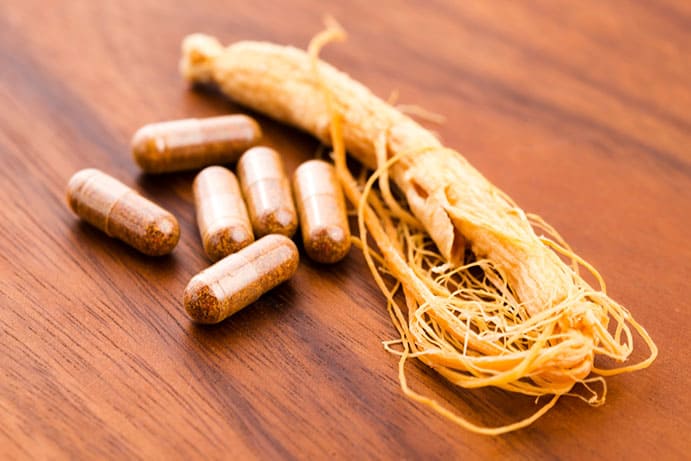 Ginseng is one of the most well-known herbs in the world.

It’s associated with a long life and high vitality in traditional medical systems throughout Asia and in North America where it grows wild.

In recent years, nootropics companies have started incorporating this herb in their formulas — and for good reason.

Here, we’ll discuss why people are using ginseng as a nootropic, how it works, and which of the two ginseng species you should pay the most attention to.

Ginseng is the root of either Panax ginseng or Panax quinquefolius. Both of these species are referred to as ginseng but have some slight differences in their phytochemical makeup[1]Chan, T. W. D., But, P. P. H., Cheng, S. W., Kwok, I. M. Y., Lau, F. W., & Xu, H. X. (2000). Differentiation and authentication of Panax ginseng, Panax quinquefolius, and ginseng products by using HPLC/MS. Analytical Chemistry, 72(6), 1281-1287. (more on that below).

This herb has a long history of use, dating back about 5000 years in China and about 1200 years in North America.

In traditional Chinese medicine, ginseng is considered a Qi tonic, pertaining to the “life force energy” or Qi of the body.

Emperors and whoever could afford this expensive root used it in the hopes of improving longevity, increasing stamina, and defending themselves against illness of various kinds. The very name of the plant Panax is derived from the Greek word panacea, which means “to cure-all”.

The roots were used as a sort of cure-all for almost any condition in combination with other herbs.

What are the Benefits of Ginseng?

Ginseng has many benefits and only a handful of potential side-effects.

Balance in this context refers to homeostasis which is the body’s ability to maintain a specific set of metrics (such as blood pH, body temperature, hormone levels, blood glucose levels, etc). When we go out of range in any of these homeostatic metrics, we can become ill.

The benefits of ginseng include:

Comparing the Two Types of Ginseng

There are two species of ginseng, most commonly referred to by their place of origin — American ginseng and Asian ginseng.

The roots of these two plants are very similar and are closely related — but have some slight differences in their active components.

Asian ginseng — or Korean ginseng as it’s sometimes called — is the most commonly used species. This is because the root has been highly popular in Asia for thousands of years and there are copious amounts of information on how and when to use it. There isn’t nearly as much traditional information on American ginseng.

Asian ginseng is considered more of a yang tonic in Chinese medicine. This means that it’s qualities are stimulating and tend to produce the sensation of heat. Because of this, it’s considered the better choice for stimulating both the body and the brain.

Chemically, Panax ginseng is higher in the active components — the ginsenosides

American ginseng is considered weaker than Asian ginseng. It has a lower ginsenoside content than Asian ginseng and therefore isn’t thought to be as useful.[2]Scholey, A., Ossoukhova, A., Owen, L., Ibarra, A., Pipingas, A., He, K., … & Stough, C. (2010). Effects of American ginseng (Panax quinquefolius) on neurocognitive function: an acute, randomised, double-blind, placebo-controlled, crossover study. Psychopharmacology, 212(3), 345-356.

Traditional Chinese medicine considers American ginseng “cooler” and more of a yin tonic. This makes it useful for people who are already overstimulated in nature, often experiencing things such as anxiety or high blood pressure.

American ginseng is not commonly used as a nootropic.

The active constituents in the ginseng root are a group of compounds categorized as ginsenosides. There are dozens of them, and although they’re similar in their effects, each one is unique.

Ginsenosides are classified as saponins, well-known for their medicinal benefits in humans.

There are many different ginsenosides in ginseng, which are categorized according to three main chemical structures:

Researchers are still striving to understand these compounds in more detail and differentiate the individual benefits of each one.

The Nootropic Effects of Ginseng

G115 is the most commonly tested form of ginseng. It’s made from Asian ginseng and contains a standardized concentration of 4% ginsenosides by weight.

It’s easier to conduct tests on a standardized product, rather than a raw plant extract which can have dramatically different chemical makeups from one source to the next.

G115 and other ginseng extracts possess a wide variety of effects on the neurological system. Some are directly beneficial, others exert their benefits through improvements on other tissues of the body.

The Direct Neurological Effects of Ginseng

Research in the early 2000s involving G115 extract has found that ginseng extracts improved various metrics involved with memory, based on a series of tests taken before and after ginseng use. The study found that those taking the ginseng extract had improvements in memory quality and speed. They also reported improvements in “secondary memory” the day following treatment.[3]Kennedy, D. O., Scholey, A. B., & Wesnes, K. A. (2001). Dose dependent changes in cognitive performance and mood following acute administration of Ginseng to healthy young volunteers. Nutritional Neuroscience, 4(4), 295-310.

In 2006 an article was published highlighting improvements in cognitive performance after using ginseng.[4]Reay, J. L., Kennedy, D. O., & Scholey, A. B. (2006). Effects of Panax ginseng, consumed with and without glucose, on blood glucose levels and cognitive performance during sustained ‘mentally demanding’ tasks. Journal of Psychopharmacology, 20(6), 771-781. The study found that those taking ginseng had better scores in a task designed to test visual information processing. Researchers in this study suggested the mechanism involved had to do with ginseng’s ability to improve energy metabolism.

One of the most useful benefits of ginseng is its effect on blood sugar metabolism.

Problems in the way we metabolize sugars is a major cause for illness, fatigue, and poor cognitive function in the modern era.

When blood sugar levels spike for too long, too high, or too often, our cells find it harder to get access to the sugar they need to generate energy and do their job.

When cells in the brain struggle to get the energy they need the neurons may find it difficult to send electrical signals to other areas of the brain. This results in slower nerve transmission and signals that don’t make it to their intended destination.

It essentially makes us feel slow and groggy — we lose our mental sharpness.

Ginseng helps us feel sharp again by improving our cells access to energy in the form of sugar[7]Reay, J. L., Kennedy, D. O., & Scholey, A. B. (2006). Effects of Panax ginseng, consumed with and without glucose, on blood glucose levels and cognitive performance during sustained ‘mentally demanding’ tasks. Journal of Psychopharmacology, 20(6), 771-781. by improving blood sugar metabolism. It does this through a combined effect on the pancreas, liver, digestive tract, and cell surface.

The cardiovascular system is a critical part of all organs in the body — including the brain.

When the cardiovascular system suffers, the brain suffers as well.

Our brain has a special gate separating the blood flow inside the brain with the rest of the body. We call this the blood-brain barrier. It allows some compounds in and keeps others out.

If anything compromises the blood-brain barrier, unwanted compounds can freely enter the brain, negatively impacting the neurons and other delicate cells within the brain.

When the cardiovascular system becomes inflamed — which is common among smokers, along with obesity, and in those exposed to environmental toxins — our blood-brain barrier can also become affected. This often leads to neuroinflammation and a gradual decline in cognitive function.

Ginseng is classified as an adaptogen. This is a class of compounds that improve our ability to resist —or adapt — to stress.

A healthy stress response is fast acting and short-lived. When we’re stressed, our body makes a series of changes designed to help us either fight off or run away from danger. In many cases, we experience stress that isn’t dangerous and takes a long time to go away. We stress about things such as finances, relationships, and work deadlines.

Over time, long-term stress can have a negative impact on our cognitive function by affecting our sleep, depleting essential nutrients, and altering neurotransmitter homeostasis.

Ginseng improves our ability to resist stress by acting on the hypothalamus — the region of the brain tasked with controlling the stress response directly. There are dozens of research studies demonstrating the impact of ginseng extracts on stress. One such study showed a significant drop in the stress hormone corticosterone in stressed rats,[9]Bhattacharya, S. K., & Muruganandam, A. V. (2003). Adaptogenic activity of Withania somnifera: an experimental study using a rat model of chronic stress. Pharmacology Biochemistry and Behavior, 75(3), 547-555. indicating resistance to the induced stress state.

Summary of Using Ginseng as a Nootropic

Ginseng wasn’t traditionally thought of as a nootropic, however, many of its uses overlapped with the modern understanding of what a nootropic does.

It was used traditionally to increase energy levels, improve overall health, and enhance the memory of the elderly.

Interest in ginseng as a nootropic ingredient has exploded in recent years, and there’s been plenty of research studies involving ginseng to back this up.

Ginsengs ability to improve the stress response, control dysfunctional blood sugar metabolism, increase neurotransmitter levels, improve memory scores, and boost visual processing speed make it a prime candidate for nootropic support. For best results, make sure the ginseng extract you’re using is made from the Asian species (Panax ginseng) and contains at least 4% of the active ginsenosides by weight.