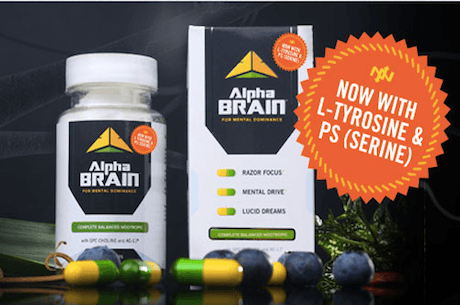 Alpha Brain is the flagship nootropic for Onnit, an American health and wellness company that offers a range of nutraceuticals to encourage peak performance both physically and mentally. Alpha Brain is composed of all-natural “Earth-grown” nutrients that improve cognitive function by activating certain aspects of neurotransmission. Supplementation with Alpha Brain can result in improvements in focus, memory and mental clarity. As an added bonus, some users have found that its use results in improved sleep quality and deep, lucid dreams.

The Origins of Alpha Brain

The idea for Alpha Brain was born when Onnit founder Aubrey Marcus asked comedian, actor and TV presenter Joe Rogan what formula he would most like to use on a regular basis. When Joe expressed his interest in a nootropic formula, Aubrey started working on it straight away. Only 6 months or so later, Alpha Brain was born.

Joe Rogan has a deep interest in cognitive enhancement, and is open to trying different things to delve deeper into the capabilities of the mind. He even goes as far as to engage in sensory deprivation to “develop the mind” by floating in the dark in a silent isolation tank.

Before Alpha Brain was developed, Joe had been dabbling in nootropics for a while, but Alpha Brain was the first supplement that he says he “didn’t want to do anything without.” He reports that the most noticeable effect for him was drastically improved better verbal recall, saying “It seems to fire up your brain at a higher RPM level… I feel like it helps me form sentences better.” Rogan is now a prominent advocate of Alpha Brain.

Onnit prides itself on creating supplements based on proven clinical data, and Alpha Brain™ is no exception. Developed in consultation with medical professionals, the majority of its ingredients have been shown to be associated with cognitive enhancement in some way. Alpha Brain comes in capsule form, more recently updated to be ‘naked’ – meaning it contains no artificial colours or flavours.

But Does it Actually Work?

While many of the ingredients of Alpha Brain had been proven to be effective in improving memory and focus on their own, it was not until 2014 that research began examining the effects of the exact combination of ingredients present in Alpha Brain.

Dr. Todd Solomon and his team of researchers at the Boston Center for Memory undertook a randomized, double-blind, placebo-controlled pilot study of 17 healthy adults aged 18-35 with normal mental function, no history of mental illness, and no concurrent medication. All participants received a placebo for two weeks, and either a placebo or Alpha Brain for the subsequent six weeks. The researchers found significant improvements in verbal memory and executive functioning in those participants that had received Alpha Brain compared with those that received the placebo, but noted the limitations conferred by the low sample size.

Late in 2014, the results of a larger study of over 60 healthy adults showed the same results (not yet published), giving very strong clinical evidence for the efficacy of Alpha Brain. In addition to neurocognitive tests, participants underwent an electroencephalogram (EEG), which showed that Alpha Brain correlated with significantly higher peak alpha frequencies, which in turn correspond to “healthy cognition, attentiveness, and inhibition control.”

The science behind Alpha Brain is pretty convincing. But are people actually noticing these effects in the real world? Overall, the answer seems to be yes. On bodybuilding.com, six of eight reviewers were impressed with the improvements in focus and alertness. On Amazon.com, a sufferer of post-concussion syndrome was very impressed, finding that it began “improving my ability to complete thoughts, stay focused and become more productive” within a few days, “significantly improving his “quality of life.” Another reviewer said that he felt “surprisingly clear” and “mentally fresh,” and was able to work longer hours. While some reviewers report no effects at all, others report that it gave them headaches, or made them restless or easily distracted. However, many of the negative reviews out there focus not on the lack of efficacy, but on what they consider to be an exorbitant price. Some also warn against imitation products.