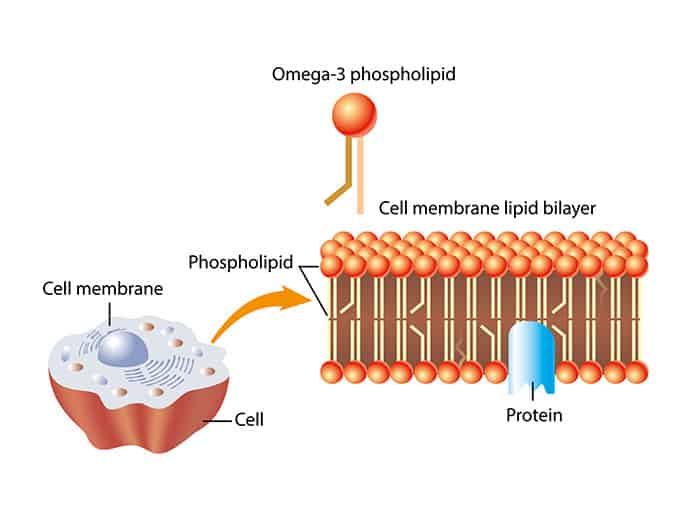 The names are long and complex, but the benefits are simple: brain optimisation.

Our brains need fats to function — We use them for everything from controlling blood flow to building neurotransmitters. Without access to fats, our brains quickly deteriorate.

One of the most important sources of fat-containing brain foods are the phospholipids.

Phospholipids are used primarily to slow the onset of age-related cognitive decline — such as Alzheimer’s or dementia and offer widespread benefits to all brains, even healthy ones.

In this article, we’re going to go over whys phosphatidylserine and phosphatidylcholine are important.

We’ll break down the differences between the two and go over what the scientific community says about these nutritional nootropic supplements.

The Brain is Made of Fat

Our brains require a steady supply of fat to thrive.

What Does the Brain Use Fat For?

Over half of the brain is fat, what is it for?

Some common applications of fats in the brain include:

Fats: Food for the Brain

Like other organs, the brain is in a constant state of flux.

Cells are born, age, die, and are recycled — if they aren’t replaced, cognitive output begins to suffer.

Neurotransmitters and chemical messengers are created and destroyed — without them, we lose our ability to maintain neurochemical balance.

The myelin sheathing that insulates electrical impulses from our nerves need to be replaced from time to time — if not, they “short out”, which is what happens with multiple sclerosis.

In order to support this flux, we need a steady stream of raw ingredients.

We can manufacture some fatty precursors ourselves from food, others we cannot.

Perhaps the most important group of fatty precursors concerning the brain are the phospholipids.

What are Phospholipids? What Makes Them so Important?

There are two phospholipids in particular that are important for optimising brain health:

Phosphatidylserine is a molecule consisting of phosphorous, a fatty acid, and L-serine — an amino acid and key precursor for the manufacture of cell membranes.

What are the benefits of phosphatidylserine?

Phosphatidylserine plays a role in keeping the mind sharp as we age. It’s naturally produced in the body, but we produce less as we age.

We use phosphatidylserine for functions such as cell signalling, cell fluidity, and modulating neurotransmitter levels.

The trick to using it effectively is to use it regularly for long periods of time.

How does it work?

Our brains make phosphatidylserine naturally — it can be found in abundance in the brain, lungs, testes, kidneys, liver, bones, heart, and in our bloodstream.[10]Folch, J. (1942). Brain cephalin, a mixture of phosphatides. Separation from it of phosphatidyl serine, phosphatidyl ethanolamine, and a fraction containing an inositol phosphatide. Journal of Biological Chemistry, 146(1), 35-44.

It’s believed to provide fluidity for the cells, especially nerve cells. Fluidity in the cell membrane improves the cells’ ability to send signals and communicate with other parts of the body.

Apoptosis is important because the body uses it to tell cells that are either sick or worn out to self-destruct and make room for healthy cells to take their place.

Where does it come from?

The typical dose of phosphatidylserine is 100 mg taken 3 or 4 times per day.

Like other nutritional nootropics, it’s vital that you take this supplement over long periods of time. Concentrations of phosphatidylserine take a few weeks to build up in the brain before they start delivering benefits.

It also tends to offer a deeper, longer-lasting change in cognitive function than more direct nootropics such as Noopept or Piracetam.

You can expect 2 or 3 weeks of steady use before you start to notice any benefits. These benefits often remain for 6-12 months after stopping the supplement.

Phosphatidylcholine is very similar in structure to phosphatidylserine, only instead of an L-serine group, it contains a choline chemical group.

What are the benefits of phosphatidylcholine?

The brain uses the phospholipid as a building block for cell membranes and the myelin around nerve cells.

The choline molecules are stripped off and used to build neurotransmitters such as acetylcholine — a critical component of learning and memory.

Where does it come from?

One of the best sources of phosphatidylcholine is eggs, but we also find it in foods such as soybeans, mustard, and sunflower seeds.

The typical dose of phosphatidylcholine is 500–4000 mg per day, usually divided into 2 or 3 doses throughout the day.

Similar to other nootropic phospholipids, phosphatidylcholine should be taken regularly over long periods of time before any benefits are experienced.

Does Scientific Research Support the use of Phospholipids for Cognitive Enhancement?

There’s been an increase in interest in phospholipids in recent years as a potential treatment for neurological conditions like multiple sclerosis, Alzheimer’s disease, anxiety, and depression.

A study published in 1991 involving 149 patients with age-related memory decline were given either 100 mg phosphatidylserine or a placebo for 12 weeks. Researchers noted an improvement in both learning and memory in the treatment group. They concluded that “[phosphatidylserine] may be a promising candidate for treating memory loss later in life”.

Animal studies involving aging rats were given phosphatidylserine at a daily dose of 15-50 mg/kg. Researchers noted that rats given phospholipids showed a lower rate of cognitive decline as the rats got older.[14]Calderini, G., Aporti, F., Bellini, F., Bonetti, A. C., Teolato, S., Zanotti, A., & Toffano, G. (1985). Pharmacological Effect of Phosphatidylserine on Age‐Dependent Memory Dysfunction. Annals of the New York Academy of Sciences, 444(1), 504-506.

One of the primary treatment aims for Alzheimer’s disease is to inhibit an enzyme responsible for breaking down the memory-associated neurotransmitter acetylcholinesterase.[15]Shintani, E. Y., & Uchida, K. M. (1997). Donepezil: an anticholinesterase inhibitor for Alzheimer’s disease. American journal of health-system pharmacy, 54(24), 2805-2810. Research proved that cell membranes high in phosphatidylserine correlate with a natural downregulation of the enzyme, supporting optimal levels of acetylcholine in the brain and slowing the onset of Alzheimer’s disease.[16]Tsakiris, S., & Deliconstantinos, G. (1984). Influence of phosphatidylserine on (Na++ K+)-stimulated ATPase and acetylcholinesterase activities of dog brain synaptosomal plasma membranes. Biochemical Journal, 220(1), 301-307.

36 children between the ages of 4 and 14 with ADHD were given either 200 mg phosphatidylserine or placebo for 2 months. At the end of the study, researchers concluded that the group treated with phosphatidylserine showed a significant reduction in ADHD symptoms and improved short-term memory compared to the placebo group.[17]Hirayama, S., Terasawa, K., Rabeler, R., Hirayama, T., Inoue, T., Tatsumi, Y., … & Jäger, R. (2014). The effect of phosphatidylserine administration on memory and symptoms of attention‐deficit hyperactivity disorder: a randomised, double‐blind, placebo‐controlled clinical trial. Journal of human nutrition and dietetics, 27, 284-291.

The brain contains a high concentration of fat. This fat is used to manufacture new cells, control the transmission of electrical impulses, build neurotransmitters, and regulate cellular communication.

One of the key areas of focus nootropics manufacturers use to optimise brain health is the addition of fatty acids and phospholipids. They’re used by healthy individuals to protect the brain from cognitive decline and maintain a high level of cognitive output.

These fatty molecules certainly deserve more attention. These nutritional nootropics are even more popular among the elderly for their role in offsetting age-related memory loss and Alzheimer’s disease.