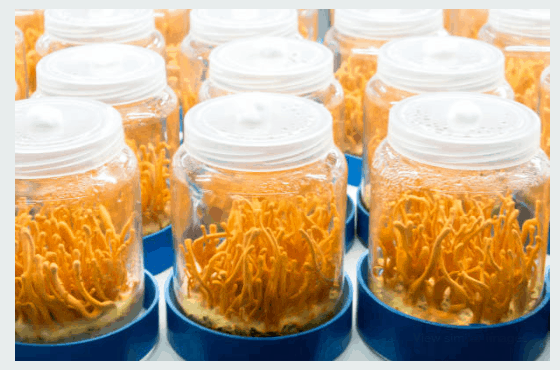 Cordyceps sinensis, more commonly known as the Cordyceps mushroom or Chinese caterpillar mushroom, has been used for centuries in traditional Chinese and Tibetan medicine. A rare type of edible fungus, this mushroom lives on certain caterpillars in the high mountain regions of China.

There’s no doubt that Cordyceps offers an extensive array of actions and health benefits. But let’s take a closer look at how exactly this rare medicinal mushroom can boost your brain.

Nootropics are trending in the health world, and for good reason. Many of the ingredients used in nootropic supplements, including Cordyceps, have been used as nootropics for centuries in China and India; it’s only recently that research is catching up. In addition to learning and memory, cognitive functions include mental processing such as attention, executive function, and verbal fluency. Many in our society today suffer from a decline in these cognitive functions simply due to our natural ageing process and oxidative stress, or sometimes because of a health condition. Cordyceps mushroom is fast becoming a popular nootropic to improve the functioning and overall health of the brain, including memory and cognition.

For your own personal assurance, check out some scientific studies on Cordyceps mushroom as a nootropic. You will be pleasantly surprised by their beneficial effects and how they may give you the cognitive edge you are looking for.  One interesting recent study showed a positive effect of Cordyceps as a nootropic specifically to combat fatigue and stress.[6]Koh, J.H., Kim, K.M., Kim, J.M., Song, J.C., Suh, H.J. (2003). Antifatigue and antistress effect of the hot-water fraction from mycelia of Cordyceps sinensis. Biol Pharm Bull. 26, 691-694.

Cordyceps Mushroom for Prevention of Alzheimer’s Disease and Depression

According to their coach, daily Cordyceps contributed to increased focus and mental energy for two Chinese athletes in 1993 at the Stuttgart World Championships. Their world-beating middle distance running performances brought Cordyceps into the worldwide spotlight. Although Cordyceps has been used in Chinese and Tibetan medicine for centuries, Western society has only really started to use Cordyceps for its health benefits since these outstanding athletic performances.[10]Panda, A.K., Swain, K.C. (2011). Traditional uses and medicinal potential of Cordyceps sinensis of Sikkim. J Ayurveda Integr Med. 2, 9–13.

Cordyceps Mushroom for Protection Against Dementia

Cordyceps may help prevent not only Alzheimer’s, but other forms of dementia as well. Dementia is an overall term used for a group of symptoms including loss of memory, a decline in communication and the ability to achieve daily activities.

A study found that Cordyceps helps protect against dementia by increasing the production of nerve growth factor in the brain, which contributes to the formation of new neurons in gray matter. Our gray matter is the part of our brain responsible for retention and recall of memories. The anti-inflammatory effects of Cordyceps in the brain are also outstanding.

Side Effects Of Cordyceps Mushroom

Cordyceps is considered safe for most people, but as with all supplements and tonics, always check with your healthcare professional before taking any new supplements. Especially be careful of Cordyceps mushroom if you are pregnant, breastfeeding or have an autoimmune disease such as multiple sclerosis, lupus, or rheumatoid arthritis. Cordyceps has been known to interfere with blood clotting, so don’t take it before or after surgery. Common side effects may include diarrhoea, nausea and dry mouth.

Although much of the research done on these medicinal mushrooms has been carried out on animals, we are starting to gain a wider grasp of the potential health benefits it can offer people, too. If you lean towards nootropics that have been used for centuries in Traditional Chinese Medicine, Cordyceps mushroom is a winner for boosting the health of your brain.