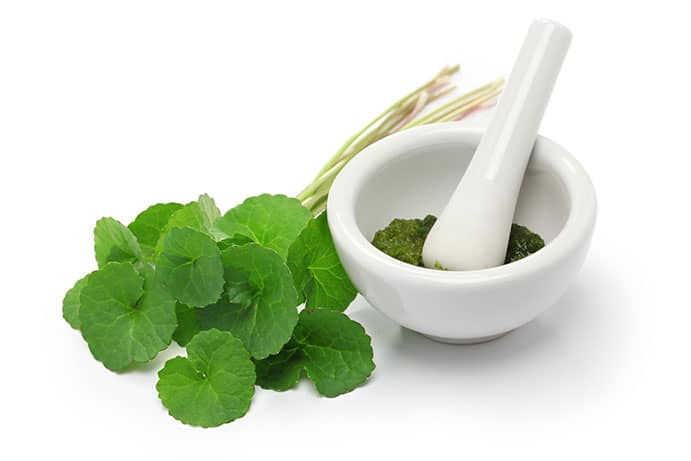 There’s a concept in traditional herbal medicine called the doctrine of signatures. This concept refers to the idea that some plants resemble the organs they exert most of their effects on within the body.

Although there are plenty of reasons why this doesn’t make sense — especially in the modern science-driven era — there are some interesting examples of this in nature, including gotu kola.

The leaves of gotu kola have a striking resemblance to the human brain. Can you guess what gotu kola is good for?

Whether this concept stands up to the rigorous skepticism of science, or not, isn’t the scope of this article.

What we will go over, however, is the benefits gotu kola offers the brain.

What is Gotu Kola?

Gotu kola is a small, unassuming herb found growing throughout Asia. It has nothing to do with cola, the beverage — which is derived from the highly-caffeinated seed of the cola plant (Cola acuminata).

In fact, gotu kola has virtually opposite effects to the cola nut — instead of stimulating the mind, it calms it — promoting a calm, clear-headed focus.

Gotu kola was made popular through its uses in Ayurvedic medicine in India. Many of our best cognitive enhancement herbs come out of Ayurveda. This is because this form of medicine places a strong emphasis on healing the mind in order to heal the body. They see the mind as our connection with the spirit, which is ultimately responsible for healing the rest of the body when it becomes damaged or diseased.

Gotu kola is a member of the carrot family but has some obvious differences. Like carrots, gotu kola is a popular culinary vegetable — however, it’s the leaves of the plant that are used rather than the roots.

As a vegetable, gotu kola is a favourite amongst elephants living in the area it grows naturally. An interesting note here is that elephants are well-known for their long and durable memories.

The Benefits of Gotu Kola

According to a review article published in the scientific journal; Evidence-Based Complementary and Alternative Medicine, on the pharmacological effects of gotu kola, the herb offers the following cognitive benefits:

Anxiety is common and can be debilitating for some. It’s a complex condition with a long list of potential causes including nutritional deficiencies, oxidative damage, or changes in neurotransmitter function (including GABA or glutamate).

Gotu kola offers numerous benefits to the brain, but the most important mechanism it uses to alleviate symptoms of anxiety is its effects on the neurotransmitter GABA.

GABA serves as the “brake pedal” for the nervous system. When we start going too fast — leading to symptoms of anxiety or panic disorder — GABA is meant to step in to slow down neuronal activity. This is how many of our best anti-anxiety medications work (such as the benzodiazepines). These medications increase GABA activity in the brain to slow down nerve transmission and calm us down.

Gotu kola does this as well — with far less potential for side-effects and abuse. Instead of modulating the receptors directly like benzodiazepines, gotu kola prevents the breakdown of GABA by inhibiting the enzyme tasked with the job — known as glutamic acid decarboxylase (GAD).[1]Ilkay Erdogan Orhan (2012). Centella asiatica (L.) Urban: From Traditional Medicine to Modern Medicine with Neuroprotective Potential. Evidence-Based Complementary and Alternative Medicine. doi:10.1155/2012/946259

2. Protects the Brain from Oxidative Damage

We have a natural defense system in place to protect us against oxidative damage. Unfortunately, this system may not provide enough protection to keep us from experiencing neurodegenerative damage over time — especially as we age.

3. Improves Energy Metabolism in the Brain

Energy metabolism is a critical component of every cell in our body. If we don’t have the energy required for the cell to do its job, problems arise. If those cells are in the brain — you’ll find a decline in cognition.

There are a few ways we can measure energy metabolism in the nerve cells lining the brain. One of the most reliable methods is to measure something called Na+/K+/ATPase.

Sodium (Na+), and potassium (K+) are ions that nerve cells pump in and out of the cell to change electrical polarity. It does this incredibly fast to transmit electrical signals to neighbouring neurons.

In order to power these pumps, we need a form of energy. ATP is the currency of energy in the human body. It requires some ATP to move the potassium and sodium around — and therefore to produce electrical activity in the brain.

If Na+/K+/ATPase activity is low, it means the brain is going to have a harder time sending messages around. This has a direct impact on cognitive output. If our neurons are slow, we feel groggy, tired, and slow.

Gotu kola is shown to boost Na+/K+/ATPase activity in the brains of mice exposed to a compound known to damage this system (pentylenetetrazol).[4]Poon, H. F., Frasier, M., Shreve, N., Calabrese, V., Wolozin, B., & Butterfield, D. A. (2005). Mitochondrial associated metabolic proteins are selectively oxidized in A30P α-synuclein transgenic mice—a model of familial Parkinson’s disease. Neurobiology of disease, 18(3), 492-498. Thereby enhancing nerve transmission and giving a mild cognitive boost — especially if there were problems with this system to begin with.

There are other ways gotu kola protects the brain from neurodegeneration aside from those already outlined.

Slowing the breakdown of acetylcholine by inhibiting acetylcholinesterase is a common mechanism of nootropic compounds due to the role acetylcholine plays in memory. Inhibiting this enzyme offers other benefits on neurodegeneration by preventing the buildup of a byproduct produced by the reaction — known as beta-amyloid.

Beta-amyloid begins to form a plaque around the neurons of the brain that have a known affiliation with the processes behind Alzheimer’s disease.[7]Strittmatter, W. J., Saunders, A. M., Schmechel, D., Pericak-Vance, M., Enghild, J., Salvesen, G. S., & Roses, A. D. (1993). Apolipoprotein E: high-avidity binding to beta-amyloid and increased frequency of type 4 allele in late-onset familial Alzheimer disease. Proceedings of the National Academy of Sciences, 90(5), 1977-1981.

By reducing the conversion rate of acetylcholine, we can passively increase the concentrations of this neurotransmitter and reduce the amount of beta-amyloid build up of plaque around the neurons — slowing the rate of degeneration and decay.

How to Use Gotu Kola

Gotu kola has a lot to offer the human body — especially the brain. Through compounding effects on the brain, it may be able to protect us from age-related cognitive decline, support energy metabolism, and boost neurotransmitters associated with relaxation and memory.

But how do I use gotu kola?

Fortunately, due to the popularity of gotu kola, it’s actually very easy to get started using this herb.

There are liquid extracts, capsules, and preformulated nootropic formulas all containing gotu kola in therapeutic doses. Any of these supplements offer an excellent way to gain the benefits gotu kola has to offer.

Additionally, gotu kola can be eaten raw. Few supermarkets sell this herb in the fresh produce section— so if this is something you’re interested in trying, you may need to find a specialty source of this herb, or grow your own.

With all forms of gotu kola use, the most important thing to remember is that the effects require time to build. You can’t take gotu kola in the morning and expect to feel its benefits later that afternoon. Most of the benefits of gotu kola require at least two weeks of regular supplementation before you can start to notice anything.

Gotu kola is an excellent example of plants that offer benefits to the organs they resemble. It’s a brain herb through and through — offering numerous unrelated benefits to this vital organ.

By improving energy metabolism in the neurons, preserving GABA levels, fighting oxidative damage, and inhibiting acetylcholinesterase — gotu kola has a lot to offer the brain.

Unlike other nootropics, gotu kola exerts most of its benefits as a protective herb, rather than a direct cognitive stimulant. This means the herb has the most to offer those who are at risk of developing neurodegenerative disorders. However, it’s also an excellent daily nootropic supplement (or food), for healthy individuals to preserve cognitive function well into their old age.